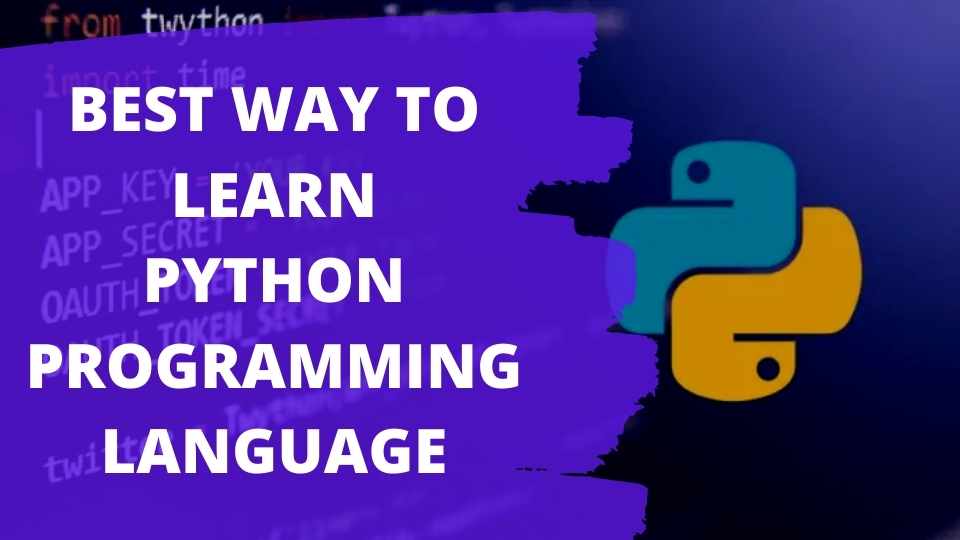 You probably have heard about Python Programming Language, but do you know what it is? Is it something you are interested in learning about? If so, you are in the right place.

In this article, we are going to look at what Python is, why you should learn it, how you can learn it, and also take a look at the prospects that it holds for you.

Python is a high-level, object-oriented programming language. It was created by Guido van Rossum in 1991. As of 2017, it is the most popular language for beginners. Python’s design philosophy is to have an explicit syntax, which is very readable, making it easy to learn and use.

It is commonly used in artificial intelligence, machine learning, big data, web development, and more. Python is known for its clear syntax, which makes it easy to learn. It is also a great language for beginners to learn, which makes it an excellent choice for anyone looking to learn how to code.

1. What is Python Programming Language?

Python is a widely used high-level interpreted language that is known for its ease of learning and readability. It is a general-purpose language that can be used in a variety of fields, from web development to scientific computing. Python is a popular language for beginners because of its simple syntax and structure.

Python programming language was created in 1989 by Guido van Rossum, and it has become one of the most popular programming languages in the world. Python is an interpreted language, meaning that you can run Python code without first compiling it into a machine-readable form. This makes it a popular choice for scripting purposes, as you don’t need to wait for a compilation process to finish before you can test your code.

Python has become one of the most popular programming languages in the world for a reason. It is easy to learn for beginners, yet robust enough for experienced developers.

Python is a general-purpose language that can be used for anything from web development to scientific computing. Additionally, Python is open source and free to use.

This means that you can download the language and start learning without spending a penny. The vast online community and abundance of resources make Python an ideal language for beginners.

It is popular because of its simple and concise syntax, making it an easy language for beginners to learn.

3. Who Uses the Python Language?

Python is used by a wide variety of people in a wide variety of industries. Scientists and researchers use python for data analysis, artificial intelligence, and machine learning. Web developers use Python to create dynamic websites and web applications. System administrators use Python to automate system tasks. Python is also used in finance, graphic design, and gaming.

Some of the most well-known users of Python are Google, Instagram, YouTube, and Netflix. Python is often used in web development, data science, artificial intelligence, and machine learning. So if you’re looking for a language that can be used in a variety of industries, Python is a great choice.

4. Pros and Cons of Python

Python has become the most popular programming language in the world and is very versatile. It is used in many different applications from web development to scientific computing. When it comes to learning Python, there are a few different methods you can choose from.

You can find a lot of resources online, or you can attend a course. However, there are also some pros and cons to consider when making your decision.

The pros of learning Python are that it is a very versatile language that is used in many different applications. It is also a relatively easy language to learn for beginners. The cons are that it can be difficult to find a job as a Python developer, and the language can be a bit more difficult to learn than some of the other options.

It is an interpreted language as opposed to a compiled language. This makes it possible to write and test code interactively. It also makes the language portable, meaning that Python programs can run on a wide variety of systems. Python adopts an object-oriented approach and a data-centric design. It comes with a large standard library that covers a wide range of tasks.

One of the best things about learning Python is that you can start from scratch. Even if you don’t know anything about programming, you can still pick up the basics in no time.

Python is a high-level language, which makes it relatively easy to understand. It’s a popular language for web development, scientific computing, data analysis, artificial intelligence, and more. In other words, Python is a versatile language that can be used for a variety of purposes.

So what will you learn? In Python, you’ll learn how to design and implement algorithms, write programs and scripts, and create user interfaces. You’ll also learn how to use basic data structures and how to debug programs.

Also Read: All Divisors of a Number in Python

You’ll get a comprehensive introduction to the language, including how to install and use Python on your computer. You’ll also learn how to write Python programs, including how to use variables, operators, conditional statements, and loops. Plus, you’ll learn how to create and use functions, and how to work with files and data. By the end of the course, you’ll be able to write Python programs that solve real-world problems.

Python is a high-level, interpreted, general-purpose programming language that considers paradigms of structured, procedural, and object-oriented programming. It is a dynamically typed language with a design philosophy that emphasizes code readability.

Python is a popular language choice for software development, web development, scientific computing, data analysis, artificial intelligence, and machine learning. A Python programmer with 2-4 years of experience can earn an annual salary of $75,000.

Python is the most popular programming language in the world and is frequently used in Artificial Intelligence (AI) applications. It is a very versatile language that can be used for a variety of purposes, such as developing websites, software or gaming applications.

Python is relatively easy to learn for beginners, and there are many online resources and tutorials available to help you get started. If you’re interested in learning Python, our Interactive Python Tutorial is a great place to start. In this tutorial, you’ll learn the basics of the language and how to use it to create your own programs.

Python is a high-level, interpreted, general-purpose programming language, emphasizing code readability. Python is often compared to Tcl, Perl, Ruby, Scheme, or Java. It has an extensive standard library and can be used on a wide variety of systems ranging from microcontrollers to large-scale computing clusters.

Python is also one of the most popular programming languages taught in universities. It is used in many scientific computing applications, finance, and machine learning. Python language is widely used by Data scientists today.

Python is popular because it’s a versatile language that works well in Web and scripting applications. What you’ll learn with this Python programming tutorial is how to create Python scripts, add data to them, write loops, use control statements and work with files.

This course will give you in-depth knowledge of Python Programming Language. We teach step by step in a very simple and easy way.

You can learn easily how to build your own web crawler, games, simulations, and much more with the help of examples. Also, many practical exercises are given which makes it easier for students to understand the subject thoroughly.

Learning the Python language is an excellent choice for developers of all skill levels. It can be used to build web applications, automate repetitive tasks on your computer and even create games. When you learn how to code with Python, you’re taking advantage of one of the most versatile languages available today.

Hope this article about Best Way to Learn Python Programming will help you. we have shared python language basics, python developer guide.